Pin It
Hello! I know it's Tuesday, which means this should be a CSA post. However, Evan and I got back from Santa Barbara last night, and I just want to share our trip with you! We took so many photos, so I'm going to break them up into multiple posts. 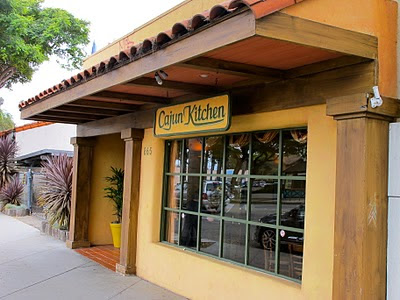 I thought I'd share our favorite breakfast spot with you first. We became obsessed with Cajun Kitchen during our trip to Santa Barbara in 2008. Cajun Kitchen has three locations, and we really like the one in Carpinteria - such a quaint town!

We love the cafe so much that our wireless internet at home is actually called "Cajun Kitchen." We're crazy, I know!

We had three breakfasts in Santa Barbara (Saturday-Monday), and two of them were at Cajun Kitchen! 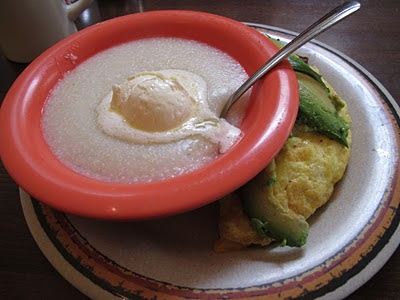 For my breakfast on Saturday, I had a three-egg omelet with mushrooms, avocado and cheese. A side of grits with butter (or in this case, apparently a side of butter with grits) was also enjoyed.

The standout of the meal = bran muffins. 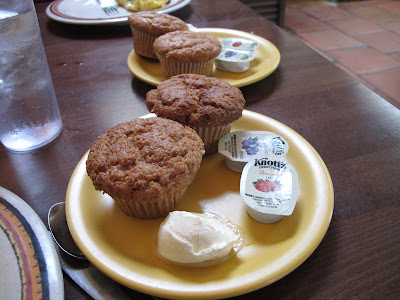 Who knew bran muffins could taste so delicious?! The cinnamon and brown sugar really come through in such strong flavors, and they are perfect when served warm. 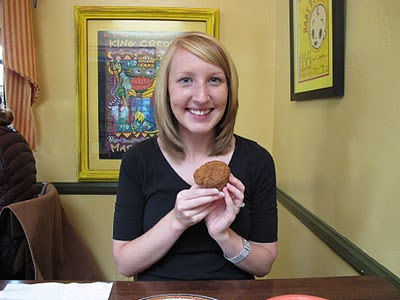 We talk about these muffins all the time, so it was wonderful to actually taste them again!

The next breakfast we had at Cajun Kitchen wasn't quite as indulgent. We had just ran four miles that morning, and weren't feeling the need to stuff ourselves silly. Although now that I look at the picture below, it was still a lot of food! 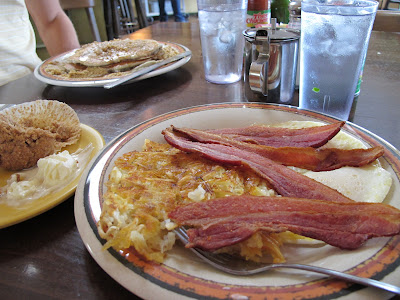 We split an order of two eggs over-easy, bacon and hash browns along with some blueberry & wheat germ pancakes (and of course, a bran muffin for each - as compared to two each for the previous breakfast!).

I cannot recommend Cajun Kitchen enough - this place is so wonderful.

I have to share a story with you that still has me in shock. When we got to Cajun Kitchen on Saturday morning, we noticed a man sitting at the bar eating breakfast with his two kids. He was wearing a Nebraska hat, so Evan went over to say "hi." Seeing a fellow Nebraskan in California was quite exciting.

Anyway, Evan had a brief conversation with the man (like 20 seconds!) - turns out he was born in Lincoln, Nebraska. Evan told him that we are recent alums of the University of Nebraska-Lincoln and...that was that. No names were exchanged or anything.

About 15 minutes later, our waitress came over and said that a man at the bar paid for our breakfast. We turned to look for the man wearing the Nebraska hat, and he was gone.

It was like a little Nebraskan guardian angel swooped into Cajun Kitchen that morning. Rather cheesy, I know, but I just can't get over that stranger's kindness. He had (and has!) no idea how much Cajun Kitchen means to us. He didn't want any glory or praise, as he left before we knew he covered our bill. What a selfless and generous person.

We paid it forward, and left our waitress a bigger tip than normal. We hope she finds a way to make a stranger's day a little brighter and passes it on.
Posted by Courtney